How to replace Artex
by
Checkatrade

Looking at the smooth pinkness of the silky ceiling, I couldn’t help but let out a sigh of relief. I know we could have done the new plasterboard ceiling ourselves. I know we could have possibly worked out the plastering eventually. But honestly – having a qualified person come in and take on the biggest job in the room? It felt like we had called in the grown-ups – and actually with the plasterboard ceiling taken care of, everything else we could handle.

Tackling a big renovation project can feel daunting and overwhelming – in this case, we’ve been putting off redecorating the old playroom (no, we’re not that fancy; we built an extension, and the open plan kitchen/diner became a kitchen/playroom instead) for years, simply because we weren’t sure where to begin. But last year, we felt we couldn’t go on any longer with the Artex ceiling – it was time for a new room.

We’re pretty good at decorating, but there are some jobs we don’t want to tackle. The whole room needed updating – but the big elephant in the room? That Artex ceiling. Ye Gods how I have hated that ceiling. The original lathe and plaster ceiling had come down years ago, the plasterboard ceiling put up by a local tradesman, and then we’d cut costs by simply stippling the Artex ourselves ‘temporarily’. Ten years later, and it was still there. Ugh.

(Our artex ceiling looked like this monstrosity By Ilya Titov | Shutterstock ) 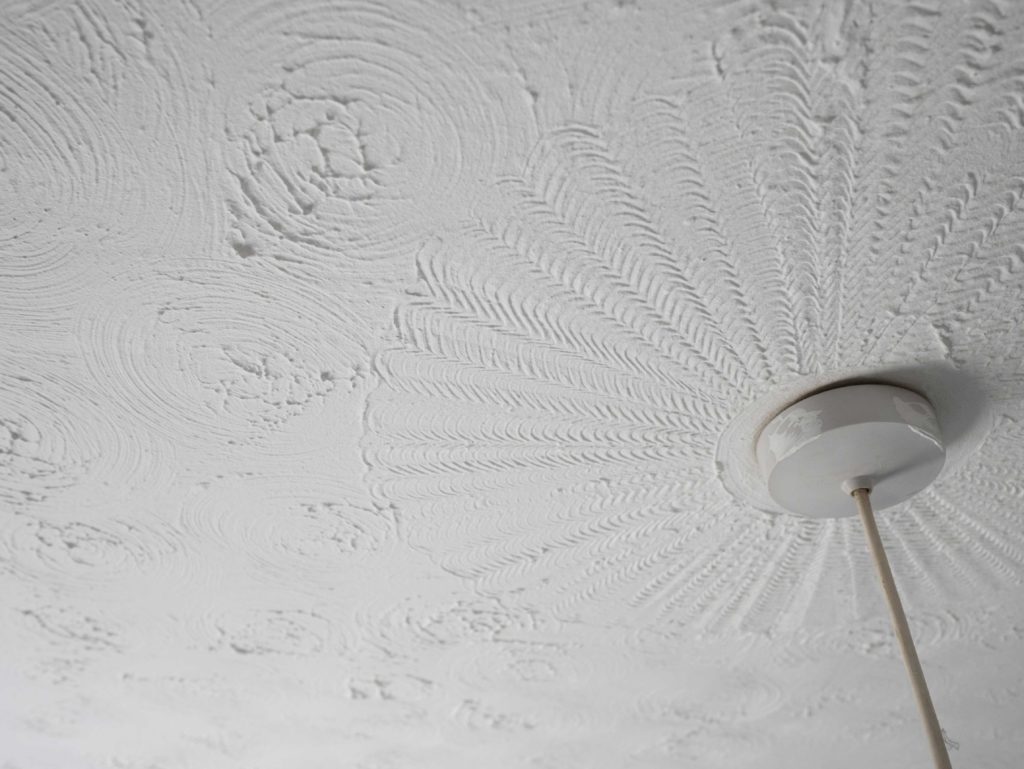 We looked at that beautifully hideously Artex-ed plasterboard ceiling and knew we needed to find out how much it’d cost for a skimming plaster. Because we’ve found over the years that you don’t have to pay someone to do everything. What you need is a professional to do the “Big Stuff” – and then you can fill in the rest.
For example, when we had our woodburner professionally fitted, we prepped the plasterboard wall ourselves, then finished off the fireplace with tiling and beams afterwards, which reduced the costs considerably. It makes every job manageable both in terms of finances and time. It also takes away a huge chunk of the stress involved – and gives you a professional brain to pick while you’re at it.
Ask around for personal recommendations, of course: the important thing is to check they are qualified, experienced and recommended. For us, the best course is to go to a trusted tradesperson site, like Checkatrade, which checks Members.

Seriously – it’s my “Rule of Life”. Find a source of stress and remove it.

Finding a qualified, trustworthy and experienced tradesperson? Stressful. I’m not a plasterer (or electrician/plumber/roofer etc.) – how the heck do I know a good one from a shonky one?

(I know this next bit sounds like a sales pitch – but seriously. If you own a house, and ever needed a plumber, electrician or roofer, you’ll probably know this already. The relief is HUGE.)

So – just let someone else do the stressy bit. If you go on Checkatrade and put in your postcode, you’ll immediately find a local vetted and qualified trader to take on the big jobs. Not only do Checkatrade do their own checks, but you can also see real customer feedback (no different checking the reviews on Amazon), plus real-life images of their work on their profile pages.

Find a local plasterer to fix your ceiling

Stress be gone. Now you’ve got an assurance that your tradesperson won’t leave a mess, won’t overcharge and will finish the job to a high standard.

Can I plaster over an artex ceiling?

So we made our searches, and a plasterer came and sucked his teeth at our gloriously ugly ceiling. He said that yes, of course, he could sand it, then do a skimming plaster on it. If that’s what we wanted… sensing there was another option, so I asked what he would do. He grinned and said

“Honestly? With Artex on it, I’d pull the entire plasterboard ceiling down and start again. Quicker and cheaper – especially if you do the dirty work.”

We’re always happy with saving time and money – so having checked with him as to any special skills or requirements (nope; it’s literally as simple as ‘pull the ceiling down’, but DO wear a mask and ventilate properly, it’s a filthy job), we booked him in and set to… *Note to self – how about you don’t get bored with clearing the room, and ‘try a little corner to see how easy it is’. You’ll just pull down most of it onto the furniture underneath that you hadn’t moved out of the way yet… We wouldn’t do that, obvs. *cough*

Once the ceiling was gone, we realised just how much bigger the room felt. And also how weird the dangling central pendant lights were. We have pretty low ceilings in our 1920s house, and we’d always wanted better lighting. Before we knew it, we were back on Checkatrade, hunting for a local electrician (another of the Big Jobs. Please don’t ever try and do electrics yourself. The risks are far higher than they are for a lumpy ceiling finish). Because we realised that if we were ever going to redo the lighting, then right now – with no ceiling in the way – was the absolute tiptop time to do it. And so the electrician came and wired us up for four recessed downlights – you probably can’t tell, but they’re already in situ in the above picture. We lived without a light in the room for a week, and then new plasterboard ceiling day arrived. Once again we were able to save some money by the husband offering to work as plasterer’s mate; plasterboard ceilings are made up of heavy, unwieldy sheets, and having two people handling it meant the job was quicker and easier.

Once the boards were up, it was time for the skimming plaster; at which point we provided a mug of tea and left; this was not a job for us. But oh the silky smooth joy of that damp pink plaster. Even in the darker fresh state, the room already looked a million times better.
Then the electrician came back for the second fixings and plopped in the recessed downlights, and with a little bartering, the plasterer agreed to pop back and sort the new coving too. 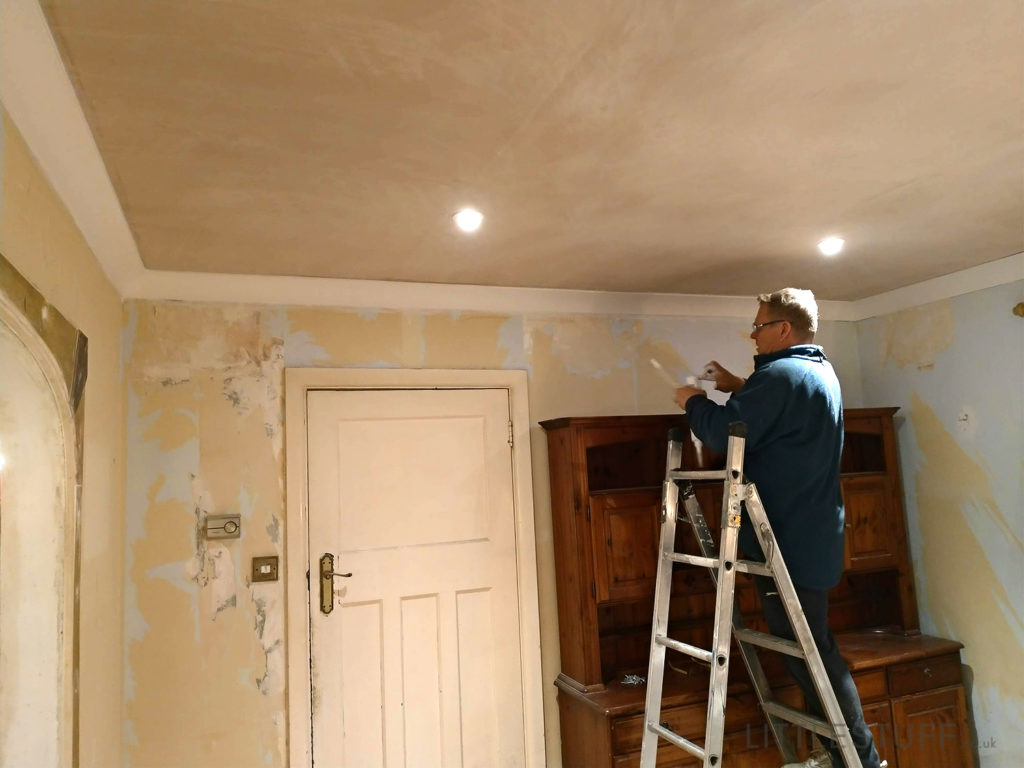 Glorious. Listen, I know it doesn’t look much to you. But go live with a stippled Artex ceiling for a decade, and then tell me how this smooth, clean expanse of plaster loveliness isn’t a thing of joy.

Once the ceiling was done and drying, it was back to us to finish up. Mr LittleStuff filled and scraped the walls, lovingly painted the new ceiling (and rather resentfully did all the woodwork too – he doesn’t love painting). Then I took over with the lining paper – he hates wallpapering, and I love it. It’s a transformation, right? In just a few days, we’d gone from a wreck of a room to something beautifully useable. Now to paint the walls and return the furniture. Quite a change, yes? Just a few odd days work; one day prepping the room, then one plasterboarding & skimming, and half a day electrics and coving. It took us probably a week all in to decorate the room and paint the furniture – and despite not doing the tricky “Big Job” ourselves, we were still so proud and pleased with the result, and definitely had that smug ‘we did that’ feeling.

Guest writer who has one of the top 10 UK parent & kids lifestyle blogs. Laura shares her witty insights on all things to inspire your next home project.

Find a local plasterer to fix your ceiling